Oil has had a bumpy week, but following the news that Trump would allow some keep exceptions to the tariffs, along with a strong jobs report and falling U.S. oil rig count, crude prices bounced back on Friday. 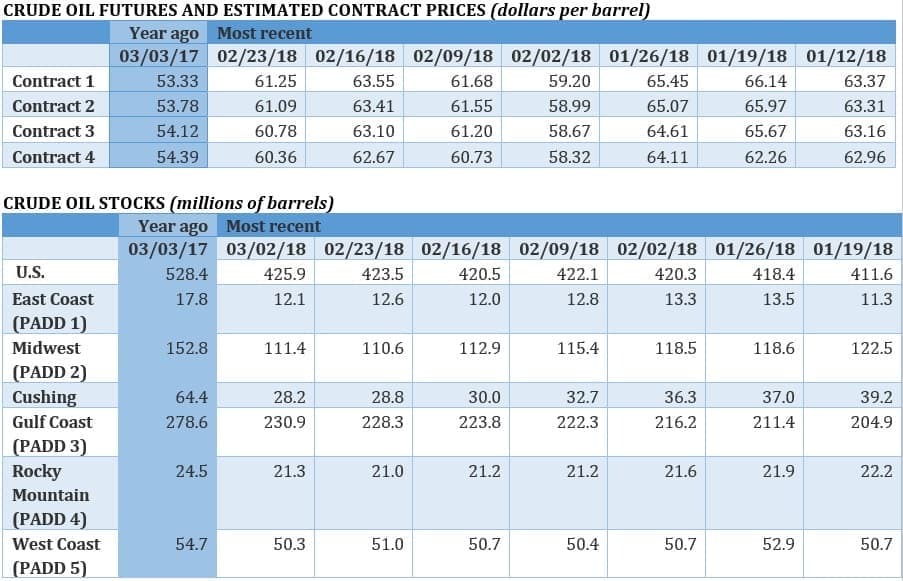 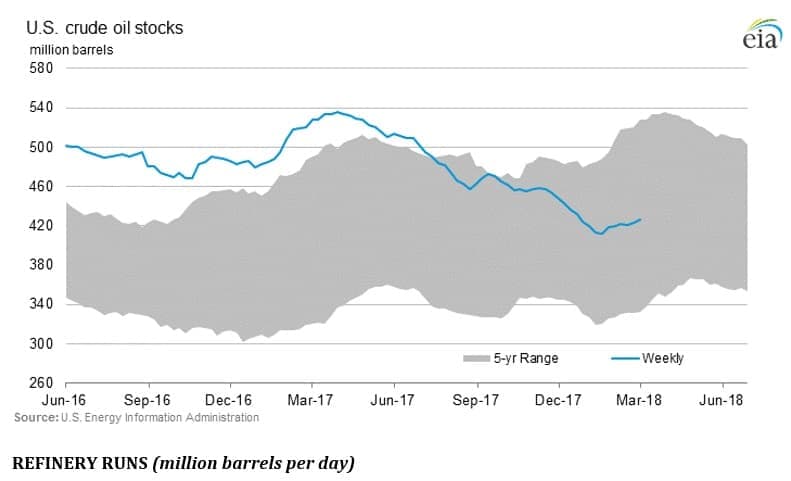 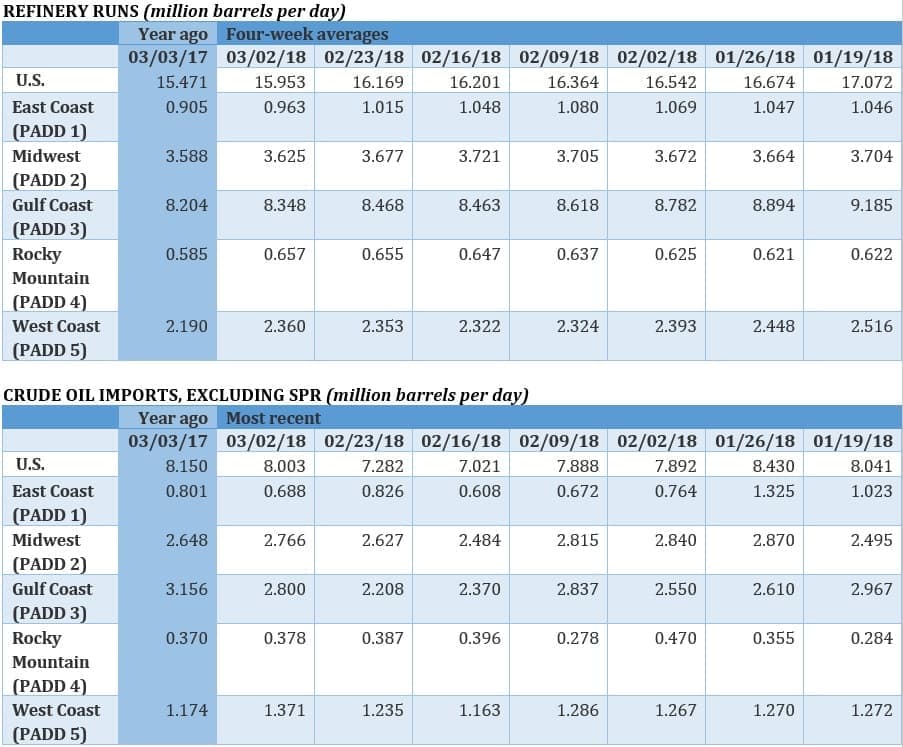 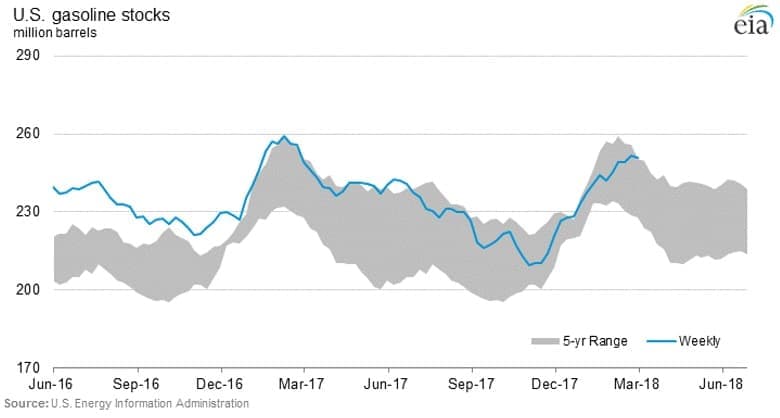 Oil posted some steep losses mid-week after the EIA reported another crude oil inventory increase. Some fears about U.S. steel tariffs, and follow up tit-for-tat protectionist measures, also weighed on crude sentiment. But news that Trump would allow some exceptions to the tariffs, as well as a strong jobs report and a falling U.S. oil rig count sent oil prices bouncing back up on Friday.

Saudi Aramco CEO: Oil industry needs $20 trillion in investment. Over the next 25 years, the oil industry will need another $25 trillion in investment just to meet expected demand, while also accounting for natural depletion at existing fields, Aramco’s CEO Amin Nasser said at the CERAWeek Conference on Tuesday. The sentiment came after the IEA warned that the oil market will be short on supply in the 2020s without an increase in upstream spending. In fact, there is a growing chorus of analysts who agree with the basic premise that the oil market could be well-supplied in the near-term because of U.S. shale, but faces supply risks in the early- to mid-2020s because of low upstream investment. “I am not losing any sleep over peak oil demand or stranded resources,” Nasser added.

OPEC production dips to 9-month low. Total OPEC production dropped to 32.14 million barrels per day in January, according to Argus Media, a 9-month low. That was largely the result of a sharp decline in output from Nigeria and Venezuela, and OPEC officials waived away concerns about the drop. “There is no plan to do anything (about Venezuela’s output) at this point,” Saudi oil ministry adviser Ibrahim Al-Muhanna said at the CERAWeek Conference. “The market has not reached the point of balance … there is no need to address it this year.” Related: The Mysterious Chinese Company Looking To Buy Rosneft

Oil and gas eye steel tariff exemption. After vociferously opposing President Trumps’ steel tariffs, some in the energy industry were somewhat relieved when the White House said it would allow certain companies and industries to apply for an exemption if they cannot procure enough steel domestically. Many parts of the energy industry, including pipeline construction, involves a special type of steel that is difficult to source in the U.S. A long list of companies warned that the tariffs could have a negative impact on oil and gas. For instance, Royal Dutch Shell (NYSE: RDS.A) said that the duties could impact the company’s decision to move forward on a major oil project in the Gulf of Mexico.

Mexico eyes heavy oil production. Mexico’s energy regulator said this week that heavy oil production could offer the country a “short-term investment opportunity.” More heavy oil would be readily taken up by U.S. refiners, especially because heavy oil supply has dipped elsewhere, aside from Canada. “The margin between WTI and heavy Canadian crude is at its narrowest in several years,” Zepeda said at the CERAWeek Conference on Tuesday. “The Gulf coast refineries were designed to process heavy oil from Mexico and Venezuela, where its production has been in decline. Heavy oil in the Gulf of Mexico is going to be in high demand.” Still, increasing production would require farming out some work to the private sector, which is not in Pemex’s near-term plans.

MBS to London. Saudi Crown Prince Mohammed bin Salman visited London this week to discuss some foreign policy issues with the British Prime Minister, but analysts see one key objective of the trip was to try to build a relationship with the west and tamp down investor concern after last year’s purge of the Saudi elite. MBS will also want to curry favor with international investors as the Kingdom prepares its IPO of Saudi Aramco. Saudi Arabia is still mulling the location of the public offering, deciding between London, New York and Hong Kong.

ExxonMobil CEO: Oil prices could fall if demand falters. While everyone is worried about U.S. shale supply undercutting oil prices, ExxonMobil’s CEO Darren Woods says economic growth, which is bolstering oil demand, is the key. Strong global growth is what’s “really driving demand at levels much higher than recent history,” Woods said. He warned that the oil market will suffer from oversupply if demand “starts to tail off.”

Oil industry shrugs off peak oil demand, but climate concerns rising. Top oil industry officials dismissed concerns about a rapidly approaching peak in oil demand at the CERAWeek Conference, but what was notable was how much climate change came up at the event. In particular, Royal Dutch Shell’s (NYSE: RDS.A) CEO Ben van Beurden warned about the risks to the oil industry form climate change. “There may not be total unity behind the Paris Agreement any longer, but there is no other issue with the potential to disrupt our industry on such a deep and fundamental level,” van Beurden said.

Citi: Oil to drop below $60 by summer. Citi’s Ed Morse says that U.S. shale is going to flood the market, pushing Brent prices into the $50s within a few months. Others disagree. Gary Ross, global head of oil analytics and chief energy economist at S&P Global Platts, told the WSJ that WTI could jump into the $70s later this year because of soaring demand. Needless to say, analysts have a wide range of opinions about what to expect in the oil market over the next few quarters.

Related: Saudis Hint They Could Delay Aramco IPO Until 2019

ExxonMobil announces spending increase. ExxonMobil (NYSE: XOM) said it would dramatically increase spending in order to boost oil and gas production in the coming years, but the move was not received well by the oil major’s shareholders. The spending increase, which would see capex jump by about a third this year to $24 billion and steadily rise to $30 billion by the early 2020s, was met with a 3% selloff in the company’s share price. Exxon said it would double earnings by 2025 and would focus on its discoveries in Guyana, the Permian, along with LNG and its downstream refining and petrochemical units.

Saudi Aramco considers massive spending spree on shale. Bloomberg reports that Aramco could begin producing shale gas this month from its North Arabia basin. Aramco says the assets are similar in size to the Eagle Ford, and the company could spend as much as $300 billion to develop oil and gas projects, including shale gas, over the next 10 years.

By Tom Kool for Oilprice.com