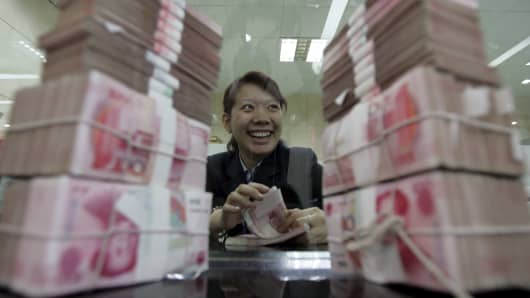 Getty Images
A clerk counts stacks of Chinese yuan at a bank in Beijing, China.

Trade in Chinese yuan-denominated crude oil futures has surged since President Donald Trump pulled the U.S. out of the Iran nuclear deal.

Launched on March 26, crude oil futures on the Shanghai International Energy Exchange (INE) were met with fanfare — and skepticism about how much a state-managed marketplace could displace the well-established crude trade in the New York Mercantile Exchange’s West Texas Intermediate and the Intercontinental Exchange’s Brent futures.

“Beijing ‘s attempts to ‘internationalize’ the contract appear to have paid off.”-BMI Research

But Trump’s move to reimpose sanctions on Iran may have spurred interest in the Chinese oil futures. Last Wednesday, daily trade volumes in INE oil futures hit a record of over 240,000 lots, double what they were on Tuesday when news of the renewed sanctions broke.

“There has been speculation that restrictions on Iranian oil sales and the lack of access to dollar financing will boost demand for yuan-denominated Shanghai futures,” said BMI Research in a note on Monday. “With China deepening its energy ties with Iran and given Beijing’s desire both to support the contact and — relatedly — to further internationalize the use of its currency, payment in yuan and benchmarking against Shanghai futures would seem logical.”

Doubts about how long it will last

Even so, some industry watchers remain skeptical over the long-term impact Iran will have on the Chinese futures, as Iranian crude is not deliverable into the Shanghai oil contract.

Even so, interest in the Shanghai oil futures have surpassed expectations, with Chinese state-owned companies and foreign interests taking part in the trade.

At least one oil sales agreement has been signed with state-owned major Sinopec, Reuters reported.

“Concerns over heavy state dominance in the oil sector does not appear to be dampening participation in the contract, neither does its denomination in yuan and the added FX risks this brings,” said BMI, adding that the futures are gaining tracing.

“Beijing ‘s attempts to ‘internationalize’ the contract appear to have paid off,” it added.