We are still in a period of headline risk in financial markets generally. Stocks, bonds and currencies are all reacting to news on subjects as diverse as trade, North Korea, and Italian politics. Neither Italian political turmoil nor an on again, off again relationship with North Korea are anything new, but the prospect of an escalating trade war has traders in every market worried.

The bond and currency markets are reacting as you might expect, with the U.S. 10 Year yield falling and the Dollar gaining ground as the “risk-off” trade gathers pace.

Both have seen a bounce off obvious levels, 95 for the Dollar Index and 2.75 for 10 Year yields, but for now the trends remain intact.

Stocks are a different story. U.S. equities are holding up remarkably well and remain close to the top of an upward recovery channel that has been in place since April. The feeling seems to be that healthy corporate profits and reasonably strong economic data trump (if you’ll forgive the pun) the headline risks. 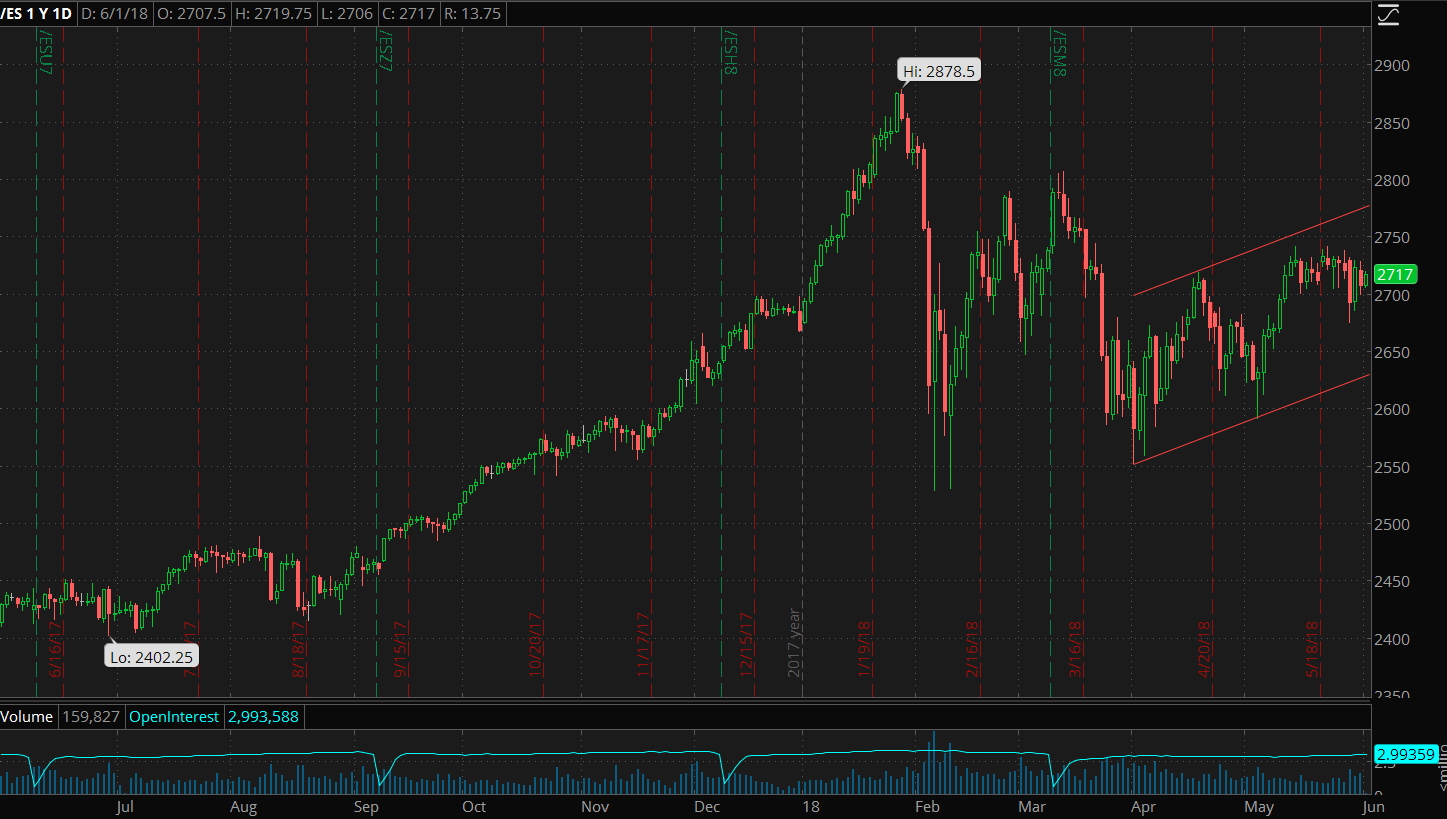 As always, geopolitical risk as it relates to oil is focused on the Middle East. The Trump administration seems to have picked a side in the ongoing conflict between Saudi Arabia and Iran, increasing the risk of the proxy wars between the two rivals in Yemen and Syria growing into full-blown open warfare. However, with the Saudis now getting U.S. support they will probably be content to wait and see the effects of renewed U.S. sanctions and, as this article at foreignpolicy.com posits, that also makes aggression from Iran far less likely.

All in all, more simmering looks more likely than a full blow-up so the upward pressure on oil that we have seen recently from the Middle East will fade into the background for a while.

The situation in Europe brings on a sense of déjà vu. It is eerily reminiscent of 2012, when the many announcements of the death of the European Union were somewhat premature. There is some risk here, but history suggests that this too shall pass.

The geopolitical situation in the Middle East has, of course, been a major factor in supply considerations in recent days and while that has influenced WTI on several occasions, the main upward push has been in Brent. Even more fuel has been added to that by the OPEC led cuts in production have remained in place despite some reports of problems.

At the same time, six weeks of gains in the North American rig count and the conventional wisdom that U.S. and Canadian production are being, or will be, ramped up to compensate for reduced global supply. In reality though, the rig count steadied last week after six weeks of gains and the EIA numbers showed a larger than expected draw on inventories.

The potential effects of a trade war loom large. The effectiveness of the OPEC led production cuts has been magnified by the improving prospects for global growth, and that is now at risk. However, this too comes under the category of headline risk. Consistency has not been a hallmark of the Trump administration so far, and there have already been several changes of tone of the tariff issue. Another could easily prompt a quick reversal in oil. 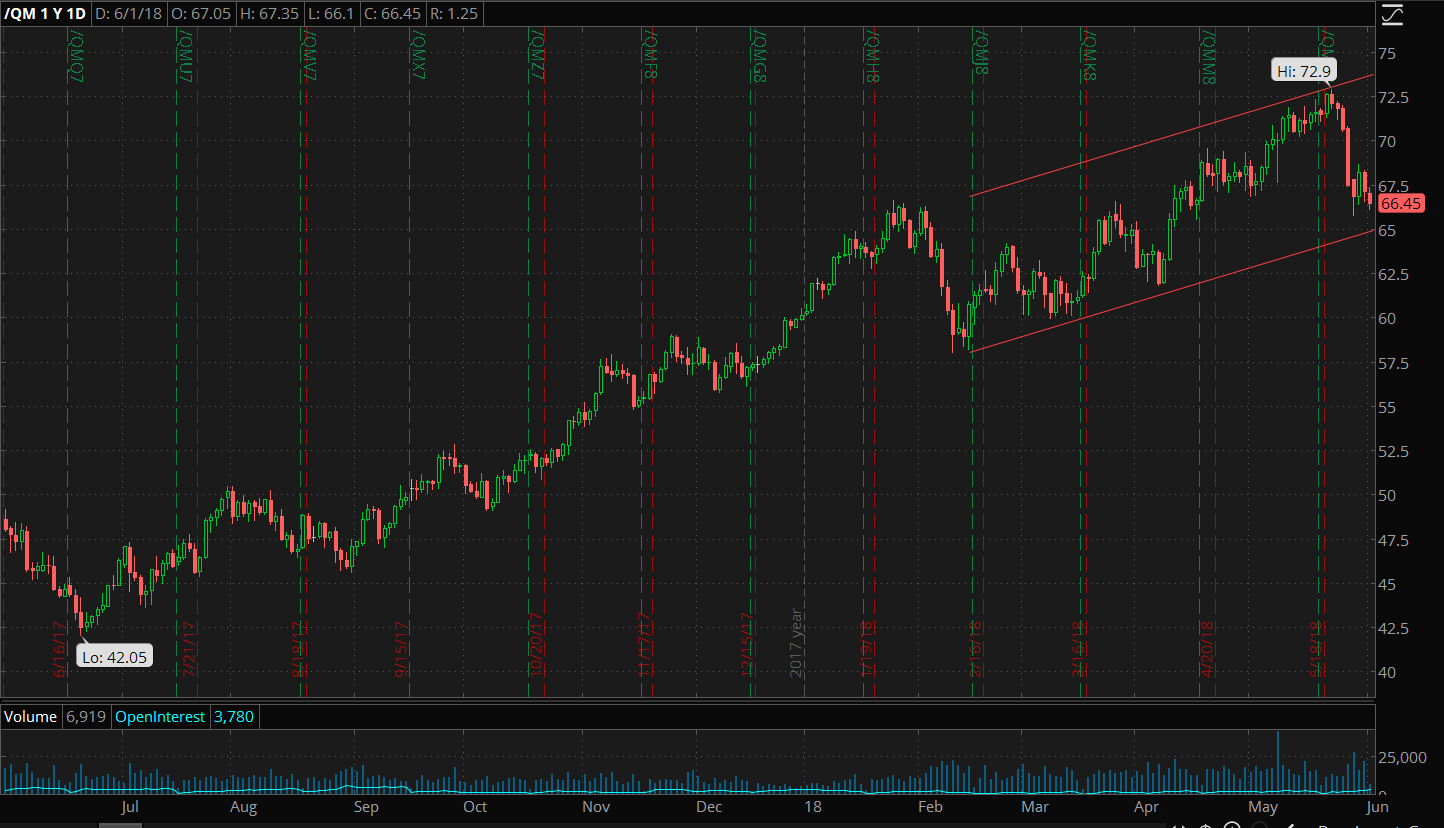 The long WTI trade was getting increasingly crowded and once a reversal or correction came that made it likely that it would be fairly sharp. We are, however, now approaching the bottom of the long-term upward channel in place since last September, and some support around or just above the $65 level can be expected.