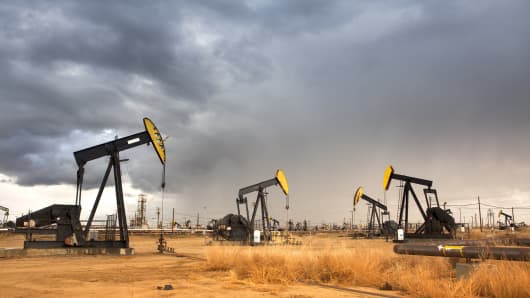 The NYMEX oil price has pulled back sharply from $72 to around $66, but that is taking place within the environment of a well-established uptrend.

In fact, the chart suggests that the pullback is not a change of trend, but it’s instead just a temporary retreat.

There are three features that support the conclusion. The first feature is the long-term support level near $65. That acted as a resistance level in January and again in April. Oil has a well-established pattern of moving in trading bands.

The standout feature on the chart is the strong support level near $43 and resistance near $54. That makes the trading band around $11 wide and gives an upside projection target for the trading band near $65 which has been achieved and exceeded. Applying the same trade band projection methods gives a long-term target near $76.

The second feature is the location of the uptrend line. The uptrend line starts from the anchor point near $43 from June, 2017. The line has successfully acted as a support level and provides a good definition of the rising trend. It has been tested several times so it acts as a second support feature with a current value near to the value of the support level around $65.

The third, and perhaps most important feature, is shown with the Guppy Multiple Moving Average indicator.

The long-term group of averages is well separated and shows strong and consistent investor support for a rising trend. When prices retreat, investors enter the market as buyers. That is the most consistent trend support behavior shown in the GMMA indicator on the oil chart in nearly a decade.

The degree of separation between the long-term and short-term GMMA is also steady. The consistent degree of separation is a characteristic seen with stable trends. That again confirms trend strength and stability and suggests that the current retreat is temporary rather than the beginning of a trend change.

The short-term group of averages — which reflects the way traders are thinking — shows a low level of volatility. That group is not characterized by rapid compression and expansion, which shows that traders are buyers whenever the price falls. That tells us traders are also confident that the uptrend will continue.

Those support features and the trend strength features all suggest that the price of oil is experiencing a temporary retreat. The longer-term trading band target is near $76 and potentially higher. It is higher because the $76 level has no history of providing strong support or resistance.