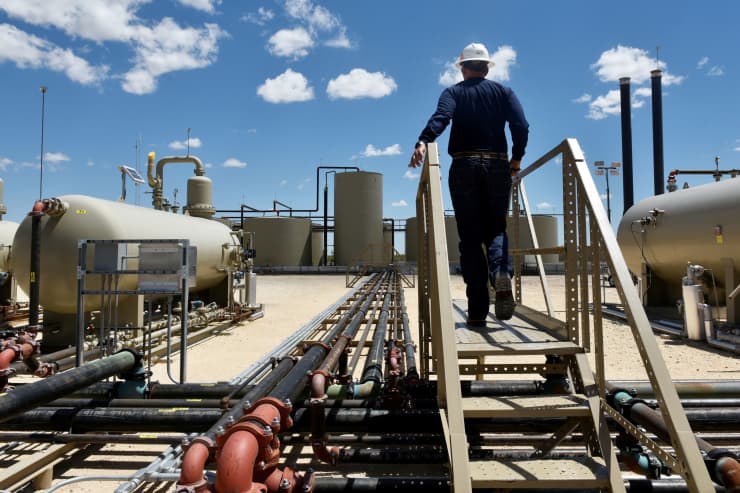 A worker walks through an oil production facility owned by Parsley Energy in the Permian Basin near Midland, Texas, August 23, 2018.
Nick Oxford | Reuters

Oil prices rose on Friday, pushed up by ongoing supply cuts led by producer club OPEC and U.S. sanctions against Iran and Venezuela, putting the crude markets on pace to post their biggest first quarter gain since 2009.

WTI futures are set to rise for a fourth straight week and are set for a first quarter gain of 31 percent.

For both futures contracts, the first quarter 2019 is the best performing quarter since the second quarter of 2009 when both gained about 40 percent.

Oil prices have been supported for much of 2019 by the efforts of the Organization of the Petroleum Exporting Countries (OPEC) and non-affiliated allies like Russia, together known as OPEC+, who have pledged to withhold around 1.2 million barrels per day (bpd) of supply this year to prop up markets.

“Production cuts from the OPEC+ group of producers have been the main reason for the dramatic recovery since the 38 percent price slump seen during the final quarter of last year,” said Ole Hansen, head of commodity strategy at Saxo Bank.

The price surge triggered a call by U.S. President Donald Trump on Thursday for OPEC to boost production to lower prices.

“Very important that OPEC increase the flow of Oil. World Markets are fragile, price of Oil getting too high. Thank you!” Trump wrote in a post on Twitter.

OPEC+ are meeting in June to discuss whether to continue withholding supply or not.

OPEC’s de-facto leader Saudi Arabia favors cuts for the full year while Russia, which only reluctantly joined the agreement, is seen to be less keen to keep holding back beyond September.

However, the OPEC+ cuts are not the only reason for rising oil prices this year, with analysts also pointing to U.S. sanctions on oil exporters and OPEC members Iran and Venezuela as reasons for the surge.

Despite the surging prices, analysts are expressing concerns about future oil demand amid worrying signs the global economy may move into a recession.

Saxo Bank’s Hansen said “the biggest short-term risk to the oil market is likely to be driven by renewed stock market weakness.”

Stock markets have been volatile this year amid signs of a sharp global economic slowdown.

“Business confidence has weakened in recent months … (and) global manufacturing PMIs are about to move into contraction,” Bank of America Merrill Lynch said in a note, although it added that “the services sector … continues to expand unabated.”

Given the OPEC+ cuts, however, Bank of America said it expected oil prices to rise in the short-term, with Brent prices forecast to average $74 per barrel in the second quarter.

Heading towards 2020, however, the bank warned of a recession. 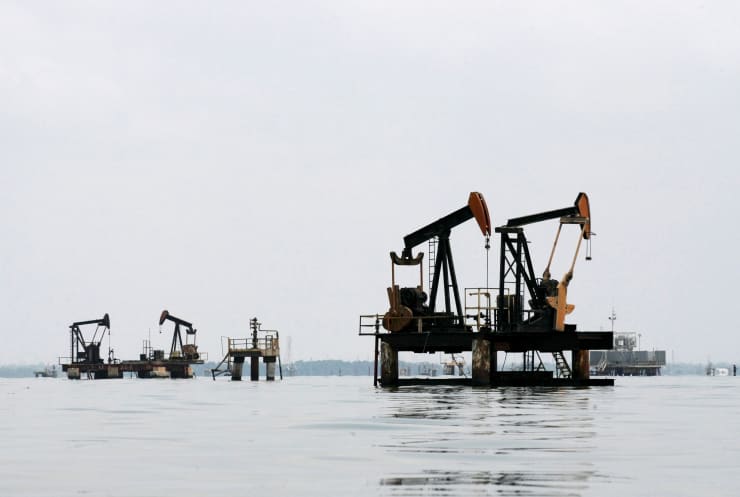 Oil pumps are seen in Lake Maracaibo, in Lagunillas, Ciudad Ojeda, in the state of Zulia, Venezuela.
Isaac Urrutia | Reuters

Oil prices were down on Thursday, extending losses into a second consecutive session following a surprise rise in U.S. crude inventories.

Demand concerns on the back of economic jitters linked to the U.S.-Chinese trade war have also capped prices.

In a fresh development, China has made unprecedented proposals on a range of issues, including forced technology transfer, as the two sides work to end their protracted dispute.

Oil prices have found support from efforts by the Organization of the Petroleum Exporting Countries (OPEC) and non-affiliated allies like Russia, known as OPEC+, to trim output as well as plummeting Venezuelan output.

In early May, analysts expect the United States will extend some sanction waivers on Iranian oil but might reduce the number of countries receiving them.

“Enjoy it whilst it lasts. The upcoming six months will bring relatively healthy demand for OPEC oil,” PVM’s Tamas Varga said in a note.

“If the unplanned supply cuts remain in place… oil prices should edge towards $75/bbl basis Brent in coming months as global inventories will draw.” 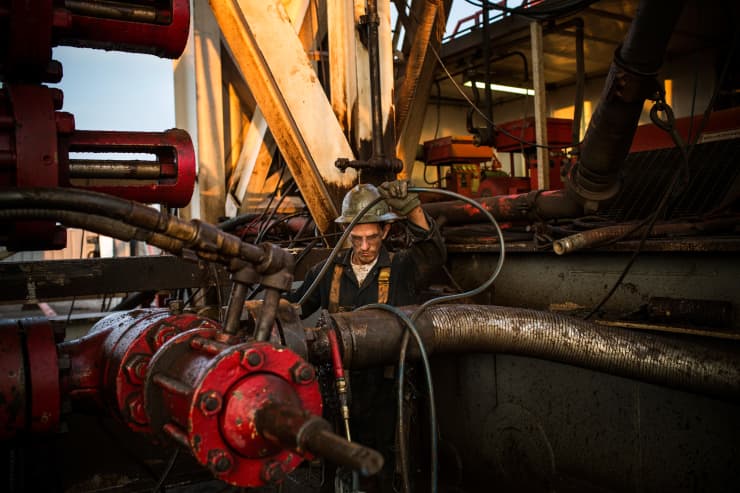 Oil prices crept up on Wednesday, extending the previous session’s rise, but gains were kept in check amid growing fears over the impact of a global economic slowdown on demand.

“We seem to have reached a state of equilibrium after the recent headline-driven choppy trading and we need to see some new impetus for price direction,” said Jeff Halley, senior market analyst at OANDA in Singapore.

That is unlikely to come until there is a conclusion on the U.S.-China trade talks, he added, referring to negotiations that restart on Thursday as the world’s two largest economies seek to end an eight-month old trade war.

Oil rose on Tuesday as Venezuela’s main oil export port of Jose and its four crude upgraders were unable to resume operations following a massive power blackout on Monday, the second in a month.

Prices have risen more than 25 percent this year, supported by supply curbs by the Organization of the Petroleum Exporting Countries and other major producers, along with U.S. sanctions on exports from Venezuela and Iran.

But worries about demand have limited oil’s rally as manufacturing data from Asia, Europe and the United States pointed to an economic slowdown.

The American Petroleum Institute, a trade organization, said late on Tuesday that U.S. crude inventories rose 1.9 million barrels in the latest week, while analysts had forecast a decrease of 1.2 million barrels.

The market was waiting to see whether official figures due later on Wednesday would confirm the API data.

“It will be very interesting to see the inventory numbers tonight. If we see a fall we could see a sharp move higher,” OANDA’s Halley said.

Hedge funds and other money managers have increased bets that demand for oil will be sustained, even as the market rallied last week. 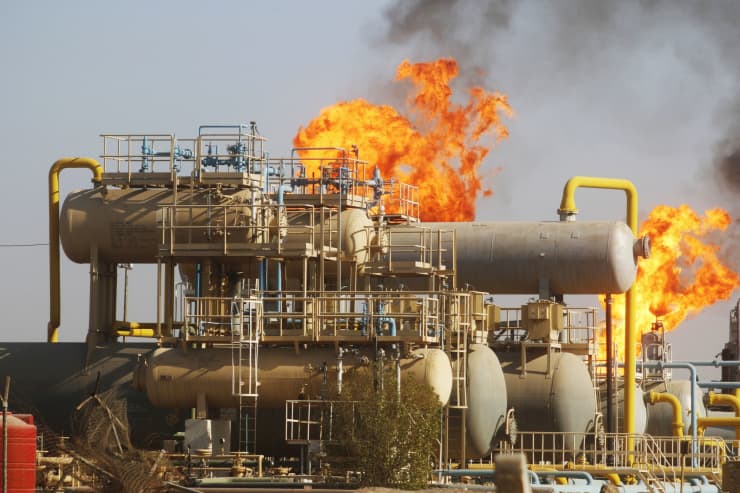 Flames emerge from a pipeline at the oil fields in Basra, southeast of Baghdad, Iraq, October 14, 2016.
Essam Al-Sudani | Reuters

Oil prices edged up on Tuesday, lifted by supply cuts led by producer club OPEC and U.S. sanctions against Iran and Venezuela, but signs of a sharp economic slowdown and potentially even a recession kept markets from rising further.

Oil prices have been supported for much of 2019 by efforts by the Organization of the Petroleum Exporting Countries (OPEC) and non-affiliated allies like Russia, who have pledged to withhold around 1.2 million barrels per day (bpd) of supply this year to prop up markets.

Prices have also been driven up by U.S. sanctions on oil exporters and OPEC-members Iran and Venezuela.

Yet analysts said oil prices would likely be higher by now if it wasn’t for a spreading economic slowdown that some say could turn into a recession soon and dent fuel consumption.

“Recession risks have risen to the highest since 2008,” said Ole Hansen, head of commodity strategy at Saxo Bank.

Manufacturing data from Asia, Europe and North America is pointing to a sharp economic slowdown.

“Outside China, Asian industry was already contracting as we turned into the New Year, ” the U.S. bank added. 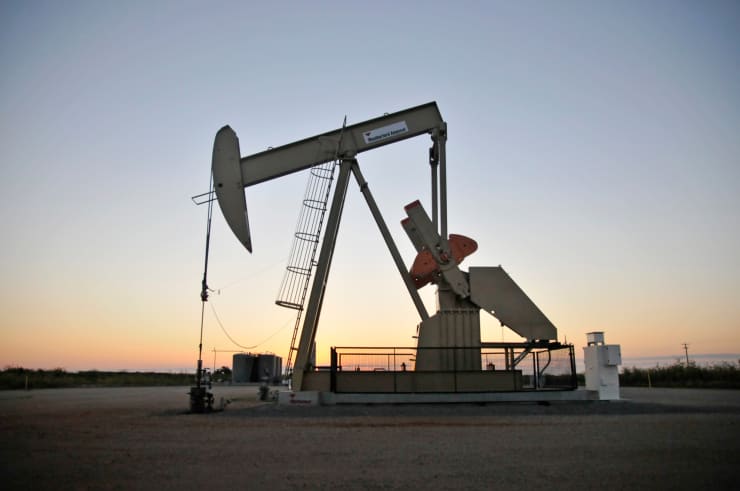 Oil prices dropped by almost 1 percent on Monday, with concerns recession could be looming outweighing supply disruptions from OPEC’s production cutbacks and from U.S. sanctions on Iran and Venezuela.

U.S. West Texas Intermediate (WTI) futures were at $58.52 per barrel, down 52 cents, or 0.9 percent, from their previous settlement.

Both crude oil price benchmarks have slumped by more than 3 percent since last week hitting their highest since November 2018.

Concerns about a potential U.S. recession resurfaced late last week after bearish remarks by the U.S. Federal Reserve, with 10-year treasury yields slipping below the three-month rate for the first time since 2007.

Historically, an inverted yield curve — where long-term rates fall below short-term — has signaled an upcoming recession.

“Estimates for growth and earnings have been revised down materially across all major regions,” said U.S. bank Morgan Stanley.

ANZ bank said the darkening economic outlook “overshadowed the supply-side issues” the oil market was facing amid supply cuts led by producer club OPEC as well as the U.S. sanctions on Venezuela and Iran.

The Organization of the Petroleum Exporting Countries (OPEC) and non-affiliated allies such as Russia, together referred to as ‘OPEC+’, have pledged to withhold around 1.2 million barrels per day (bpd) of oil supply this year to prop up markets, with OPEC’s de-facto leader seen to be pushing for a crude price of over $70 per barrel.