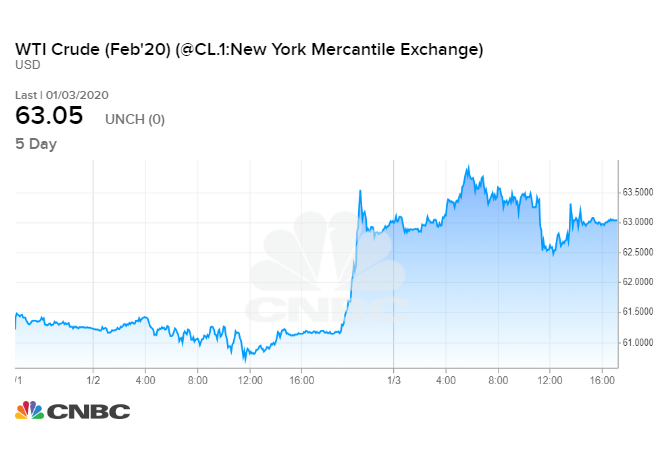 Oil prices jumped more than 2% during Sunday night trading — building on Friday’s gains — as tensions in the Middle East escalated over the weekend.

Iran has vowed to retaliate against the U.S., and the form that this retaliation takes will determine oil’s next move, according to Wall Street analysts. For instance, if the nation targets production in Saudi Arabia or Iraq — OPEC’s two largest producers — prices could move higher for longer.

Iraq is OPEC’s second largest oil producer, pumping around 4.6 million barrels per day in December. On Sunday the Iraqi parliament passed a resolution calling for an expulsion of foreign troops, which raises question about the future of the allied mission that has successfully fought the “Islamic State,” or ISIS, in recent years.

Helima Croft, RBC’s global head of commodity research, noted that in the past a geopolitical event of this nature would have caused a larger spike in oil, which demonstrates how resilient prices have become to geopolitical tensions.

This resiliency was on display in September after drone attacks on Saudi Arabia’s oil facilities in Abqaiq and Khurais took an estimated 5.7 million barrels of oil offline. While oil initially spiked 8% and climbed higher, prices ultimately drifted back down and a few weeks later were back at pre-attack levels after Saudi Aramco quickly restored production.

But this time around prices could stay elevated for longer, given tight supply and a historically weak part of the year for oil.

On Friday Eurasia Group raised its 2020 high-end base case oil target to $75 per barrel, based on “rising risk to oil infrastructure in the region.” If conflict breaks out, which the firm’s Middle East and North Africa head of research Ayham Kamel places at 30% likelihood, prices could climb as high as $95.

Citi said that other possible retaliations could be “attacks on pipeline oil flows or shipping through either the Strait of Hormuz or the Red Sea,” through which more than a fifth of the world’s oil supply flows.

Carter Braxton Worth from Cornerstone Macro said WTI looks set to reach $72 per barrel, and that investors should “embrace” the pop. “It will be right to play energy stocks on the long side in the weeks/months again,” he said in a note to clients Sunday.

That said, analysts at Morgan Stanley said that “any further escalation could keep oil prices supported in the short term,” but that any gains could be short lived. The firm said it sees Brent closer to $60 rather than $70 for the year given “an oversupplied oil market in 2020 as a whole.”