A little over a month ago I wrote about NYMEX oil and suggested that the pullback was a buying opportunity. Investors watch for the opportunity to add to long positions as the price rebounds from any of the three support features on the oil price chart.

To date, the price has not rebounded. Does that analysis still hold as oil falls towards $65?

The short answer is “yes,” but with the repeated caveat that traders need to wait for evidence of a rebound before taking a long position. The analysis holds because the technical structure of the NYMEX oil market remains the same.

The fall below the long-term uptrend line is potentially bearish, but other features suggest the bear is not in command of the market. The future importance of the uptrend line is the way this will now act as a resistance level for future rallies.

Extending the line into the future suggests that it may be early 2019 before there is a serious challenge to the $76 price level. The extended line acts as a resistance level. That time frame changes if oil is able to move above the trend line and again use it as a support level. 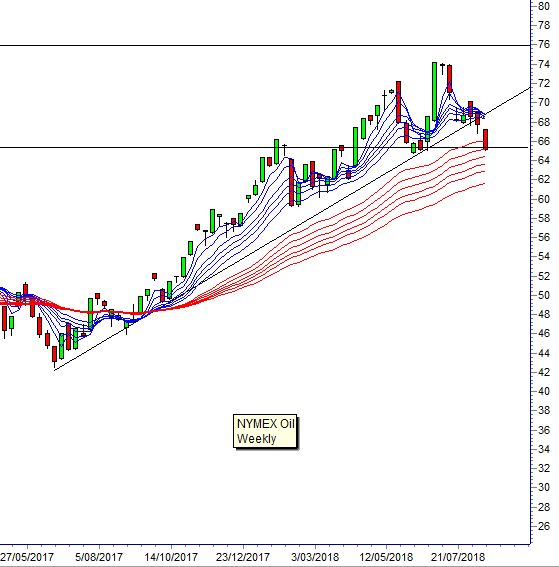 The first support feature of the chart is the long-term support level near $65. That was the support base for the most recent strong rebound rally. That level is currently under test.

Oil has a well-established pattern of moving in trading bands around $11 wide. The current price activity is testing the lower edge of the trading band. Applying trade band projection methods gives a long-term target near $76. Achieving that target is hampered by the way the projected uptrend line now acts as a resistance level.

The second trend feature is shown with the Guppy Multiple Moving Average indicator. Despite the price retreat, the long-term group of averages is well separated, which shows strong and consistent investor support for a rising trend. When price retreats, then investors come into the market as buyers. This is the most consistent trend support behavior shown in the GMMA indicator on the oil chart in nearly a decade.

Compression in the group shows the development of a trend change and compression is currently not developing.

The degree of separation between the long-term and short-term GMMA is largely steady. The consistent degree of separation is a characteristic seen with stable trends, which again suggests that the current extended retreat is temporary rather than the beginning of a trend change.

The short-term group of averages reflects the way traders are thinking and its shows an appetite for short-term trade opportunities.

Those support features and the trend strength features all continue to suggest that the oil price is experiencing a temporary retreat. The longer-term trading band target is near $76, but it may take four or five months to achieve.

Daryl Guppy is a trader and author of Trend Trading, The 36 Strategies of the Chinese for Financial Traders, which can be found atwww.guppytraders.com. He is a regular guest on CNBC Asia Squawk Box. He is a speaker at trading conferences in China, Asia, Australia and Europe. He is a special consultant to AxiCorp.

The NYMEX oil price has pulled back sharply from $72 to around $66, but that is taking place within the environment of a well-established uptrend.

In fact, the chart suggests that the pullback is not a change of trend, but it’s instead just a temporary retreat.

There are three features that support the conclusion. The first feature is the long-term support level near $65. That acted as a resistance level in January and again in April. Oil has a well-established pattern of moving in trading bands.

The standout feature on the chart is the strong support level near $43 and resistance near $54. That makes the trading band around $11 wide and gives an upside projection target for the trading band near $65 which has been achieved and exceeded. Applying the same trade band projection methods gives a long-term target near $76.

The second feature is the location of the uptrend line. The uptrend line starts from the anchor point near $43 from June, 2017. The line has successfully acted as a support level and provides a good definition of the rising trend. It has been tested several times so it acts as a second support feature with a current value near to the value of the support level around $65.

The third, and perhaps most important feature, is shown with the Guppy Multiple Moving Average indicator.

The long-term group of averages is well separated and shows strong and consistent investor support for a rising trend. When prices retreat, investors enter the market as buyers. That is the most consistent trend support behavior shown in the GMMA indicator on the oil chart in nearly a decade.

The degree of separation between the long-term and short-term GMMA is also steady. The consistent degree of separation is a characteristic seen with stable trends. That again confirms trend strength and stability and suggests that the current retreat is temporary rather than the beginning of a trend change.

The short-term group of averages — which reflects the way traders are thinking — shows a low level of volatility. That group is not characterized by rapid compression and expansion, which shows that traders are buyers whenever the price falls. That tells us traders are also confident that the uptrend will continue.

Those support features and the trend strength features all suggest that the price of oil is experiencing a temporary retreat. The longer-term trading band target is near $76 and potentially higher. It is higher because the $76 level has no history of providing strong support or resistance.

Crude oil rises to the highest level since 2014 as inventories and rig counts in the U.S. decline.

Brent is flirting with $70 per barrel.

Economic data is supportive of oil.

On June 21, 2017, things were looking pretty bleak for the crude oil market. Critical technical support stood at the November 2016 low at $42.20 per barrel on the nearby NYMEX futures contract, and the price fell through that level to a low of $42.05. Many market analysts were calling for a test of the $40 level while others believed that the energy commodity was on its way back to a thirty handle.

The spring OPEC meeting disappointed many bulls who were hoping for an extension of production cuts through all of 2018 and all they got were three more months to the end of Q1 2018. However, the price of oil found a significant bottom at the June 21 low, and since then it has been off to the races and a one-way bullish street for the energy commodity. In early August, the price was back at the $50 level, and after a correction down to $45.58 in late August, the higher low took NYMEX crude on a bullish journey that culminated in a new high for the year in late October and early November. Crude oil continued to move to the upside and finished 2017 over $60 per barrel, a level not seen since 2015.

Crude oil rose from its low for 2017 to its high over a period of five months, and it kept on going. 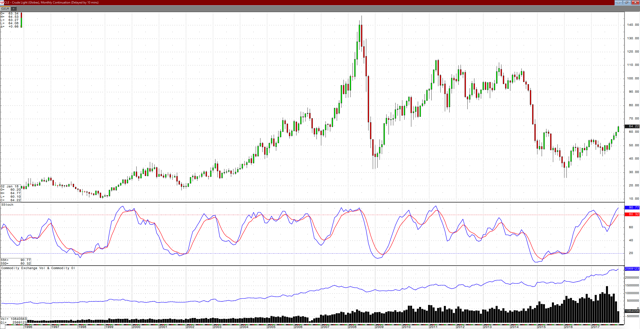 As the monthly chart highlights, crude oil rose to over $60 per barrel at the end of 2017 and the next level of critical resistance stood at $62.58 per barrel the May 2015 high. NYMEX futures reached that level when they were on their way down from highs of over $107 in June 2017, and the price was the result of a dead cat bounce that eventually took the energy commodity to its February 2016 low at $26.05 per barrel. Crude oil has been moving higher alongside rising open interest which provides a degree of technical validation to the bullish trend. While the energy commodity has moved into overbought territory on the monthly chart, the price took out the area of technical resistance last week. 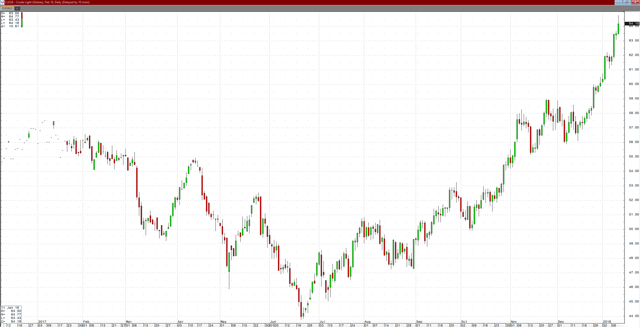